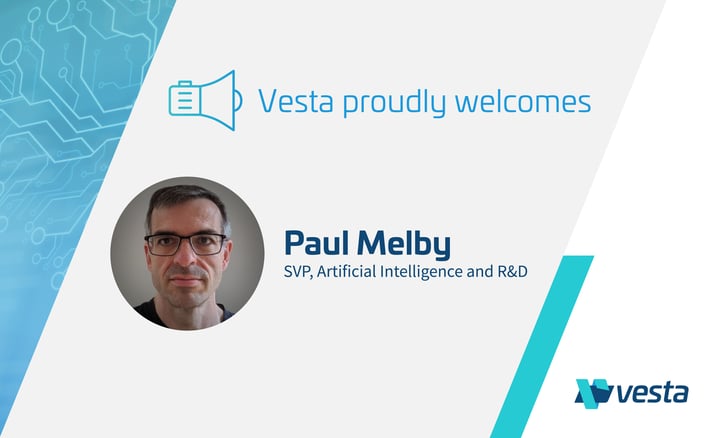 The team at Vesta is excited to welcome Paul Melby as the new Senior Vice President, Artificial Intelligence and R&D. Artificial intelligence and machine learning plays a central and critical role in Vesta’s fraud fighting capabilities and we’re looking forward to seeing the value and insight that Paul Melby will bring to the company.

Prior to Vesta, Paul spent several years at Capital One, initially leading a team of data scientists within Capital One Labs that focused on building new, innovative, data science products in partnership with the enterprise. Beginning in 2017, he transitioned to a new role within the company leading the fraud data science organization for their credit card business. In that role, he grew the team from 12 to 27 and guided them to implement new, machine learning-based defenses on the cloud and to retire all legacy fraud models, driving significantly lower fraud losses.

He’s also held roles in data science and engineering at other companies, including Palantir Technologies and the MITRE Corporation working on problems in many areas, including aviation, finance, defense and intelligence. He holds a Ph.D. in Physics from the University of Illinois at Urbana-Champaign, has published over 25 journal articles and technical reports and has been invited to give over 20 seminars at universities and conferences.

Vesta is committed to building a team of industry experts to help better serve our customers and eliminate the fear of fraud. We’re excited at the new opportunities that Paul will bring to table.

Payments NEXT: Stunning Rise of CNP Fraud and How Merchants Can Fight Back

With the dramatic increase in CNP fraud in recent years, it's critical that merchants understand...

Nadir Kiem, Vesta SVP of Operations was recently interviewed by Digital Transactions for an...